We are visiting the island of Arran with good friends for a week filled with wonderful walks, good food and wine, and lots of fun to celebrate the arrival of a new decade.

This time our travels haven’t taken us far. Sometimes you don’t have to travel very far to feel a million miles away, and Arran is one of those places. The island is just a 50-minute ferry trip from Ardrossan, a small town in Ayrshire, in South West Scotland. We are laden with walking boots, warm clothes, waterproofs and all the food and drink leftover from Christmas. A cup of tea and a bacon roll awaits on the ferry. There is lots to catch up on with old friends and very soon we arrive in Brodick. On arrival the light is dull and low cloud shrouds the islands mountain peaks, but there is an atmosphere of mystery here, its palpable and I love it. We have been coming here at this time of year with our family and friends for 20 years and it feels like I’m home.

Arran, Scotland’s 7th largest island, isn’t one of its more famous, but being so accessible from the mainland means that it does get busy in the Summer and for the famous ‘Hogmanay’ week. Full of wonderful scenery and wildlife, with fascinating geology and history, and scrumptious local treats it is a truly magical place and one of Scotland’s best kept secrets…. let’s keep it that way!  Sitting in the firth of Clyde between the Kintyre Peninsula and the Ayrshire coast, the Isle of Arran is a magnificent microcosm of the Scottish mainland. A Scotland in miniature. The Highland Boundary Fault runs across its centre, dividing the island in two, providing a diverse landscape. And if you love the outdoors, there is something for everyone. In the north and east the dramatic, mountainous ‘Highlands’ are dominated by 4 corbetts; Caisteal Abhail, Cìr Mhòr, Beinn Tarsuinn and the peak Goatfell, which offers glorious (2,800-foot) summit views across the sea to the island of Jura, to Ben Lomond and as far as Ireland on a good day. To the south and west Arran’s fertile, green ‘Lowlands’ roll into sandy bays and coastal caves which nestle behind raised beaches. The island is awash with wildlife, so don’t forget your binoculars and camera if you’re keen on wildlife photography. Red deer are numerous on the northern hills and red squirrel dart across the woodlands of Brodick castle. Badgers, otters and adders can sometimes be tempted out of hiding in Arran’s rugged countryside and offshore harbour porpoises, dolphin and occasional basking sharks are frequent visitors. It’s not uncommon to spot a buzzard, gannet, hen harrier or if you’re lucky a golden eagle. For seals, head to Merkland Point north of Brodick, or Kildonan in the south and Lochranza in the north.

Arran is also a “geologist’s paradise”. My first ever visit to the island, was a geography school field trip, where at the age of 14 year I trudged across Arran’s sills, dykes and sedimentary rock formations. The island also has a rich history, being inhabited since the early Neolithic period by the Goidelic-Irish, followed by the Vikings and Norwegians, before finally becoming part of the kingdom of Scotland in the 13th century. Early Neolithic Clyde Cairns, a form of Gallery graves, and numerous standing stones dating from prehistoric times, such as the stone circles on Machrie Moor, exist across the island.

We are lucky, the weather is good for the time of year and we don our walking boots most days. I thought I’d share some of my favourite walks – all walkable in 2-3 hours, and with a pub or café nearby for welcome refreshments 😊

It’s a 14-mile trip in the car from our base in Brodick to Lochranza, the most Northerly of the island’s villages. The atmospheric ruins of Lochranza castle stand in dramatic isolation on a shingle spit jutting into a sea loch, Loch Ranza and a splattering of houses around of loch make up the small village. The colours around the bay are stunning and there is a dark energy here. It’s the very place you are most likely to spot red deer roaming free over one of Arrans 9 golf courses or a golden eagle who nest on the surrounding mountains.  This a 6km circular walk around the northern headland of the sea Loch starting from a small car park on the North side of the loch. Walking along the rocky shoreline for a couple of km the path then ascends inland, continuing back along the headland, this time being blasted by a cold North easterly wind. In the summer its worth visiting Whin cottage, which is on the path, home to the Arran stone men crafted from locally collected rocks (I have a blue whale from there on my doorstep). Before heading home, we visit the Arran Distillery, on the edge of the village. It is the only whiskey distillery on the island and home to Scotland’s very own version of Baileys, Arran Gold. A very welcome place to stop for a bowl of soup and a coffee on a cold winter’s day.

The view of Goatfell from the Clauchland hills

The walk from ‘Brodick to Lamlash’ via Corriegills and Clauchlands is one of my favourites. Essentially a linear walk, it can be circular if you have more time, so it’s a good idea if there’s a large group to drop a car off at the Drift Inn car park in advance. Walking past the exit for the pier in Brodick head up the hill and take the second road to Corriegills. Once past the small hamlet there’s a climb up the Clauchland hills which offer panoramic views of Brodick bay across to Goatfell before descending into Lamlash Bay where the Holy Isle, a small island now owned by the Samye Ling Buddhist Community, greets our arrival. Walking along the shore before we arrive at the Drift Inn, we are treated to a glorious sunset across the bay. A glass of Arran Gold and some nibbles beside the fire at the Drift Inn, awaits. 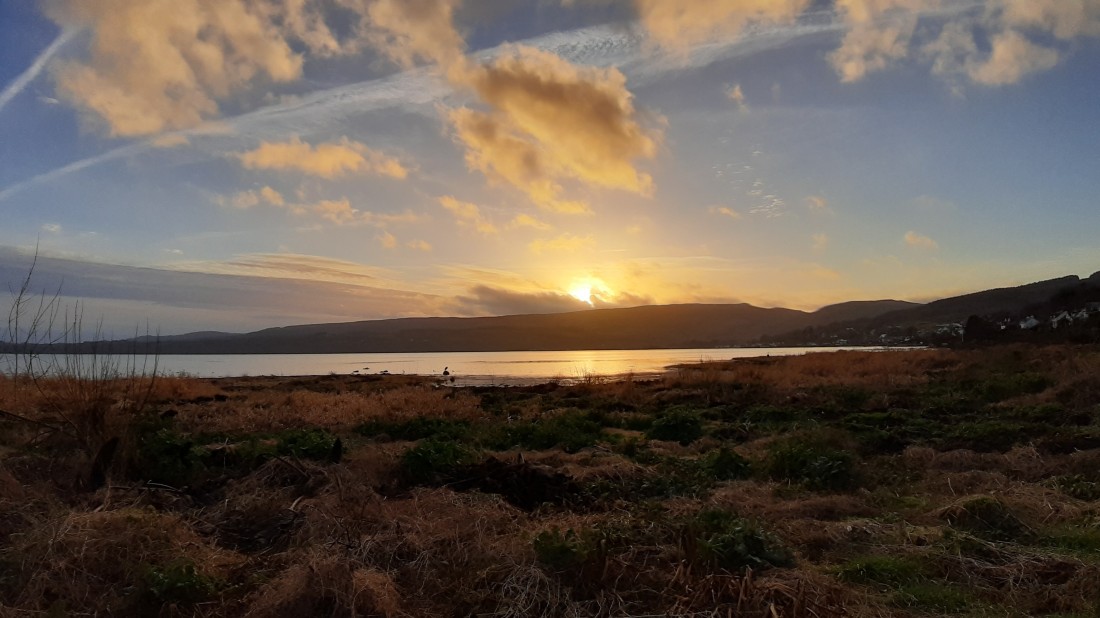 The cliffs of Doon, near Blackwaterfoot

The Kings Cave coastal walk at Blackwaterfoot is a linear walk, which needs some planning with transport if you have a large group. A car can be left at the Kildonnen hotel, where the walk ends. The walk starts at a car park a few miles north of Blackwaterfoot. After walking along the edge of a forest you hit the coast with stunning views across to Kintyre. After a steep rocky ascent, we hit a raised shingle beach where a series of caves are nestled beneath the sandstone cliffs. The cliffs most famous cave, the King’s Cave is hailed to be the cave where Robert the Bruce took shelter before the battle of Bannockburn and had that famous chat with the spider. Today the wind has dropped, and the winter sunshine is plenty. The sunlight dances across the deep blue sea and the colours on the sandstone cliffs are mesmerising. After a challenging walk along the rocks of Blackwaterfoot shore we are soon at Kildonnen Hotel, where a warm drink and laughter awaits. 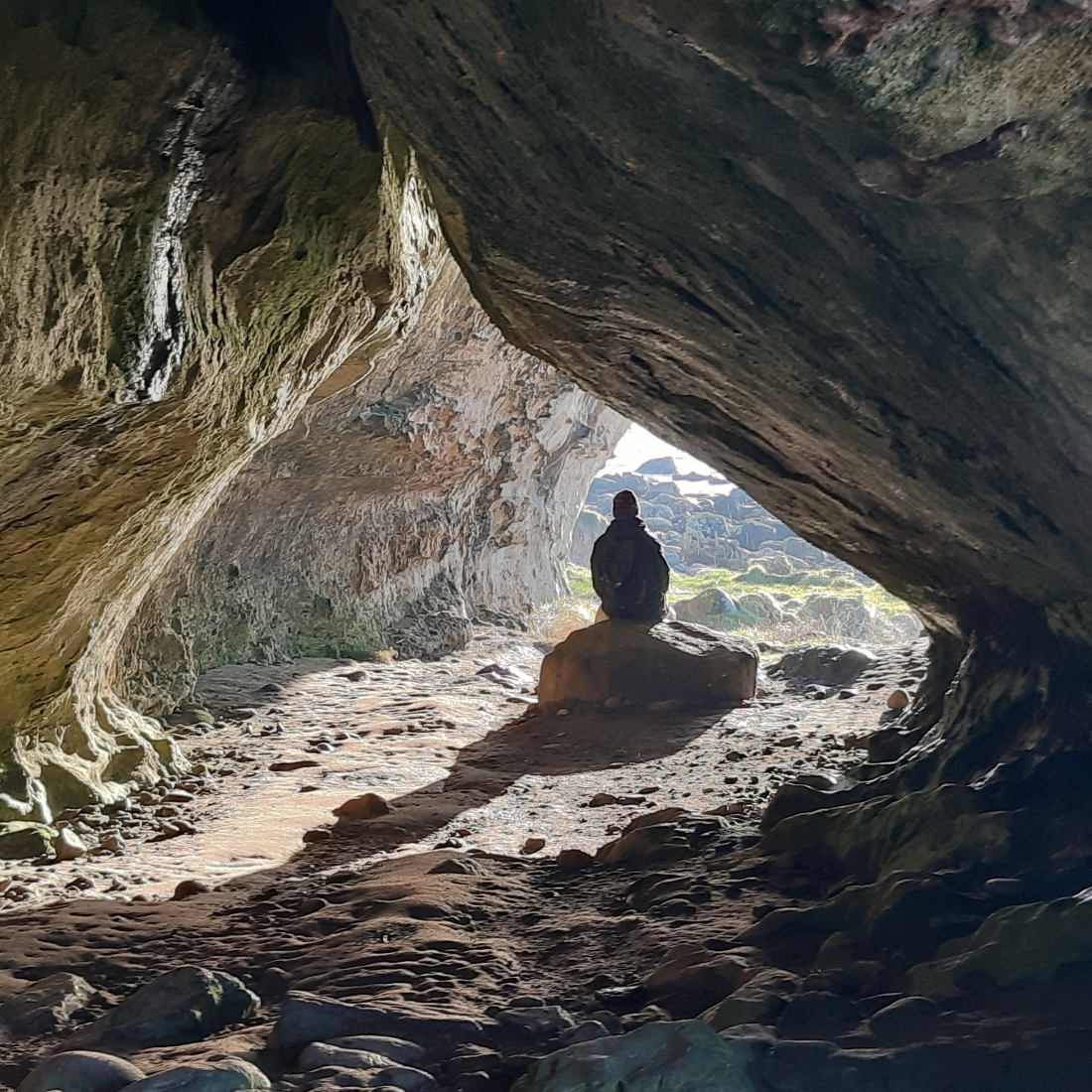 Near the Kings cave, Blackwaterfoot 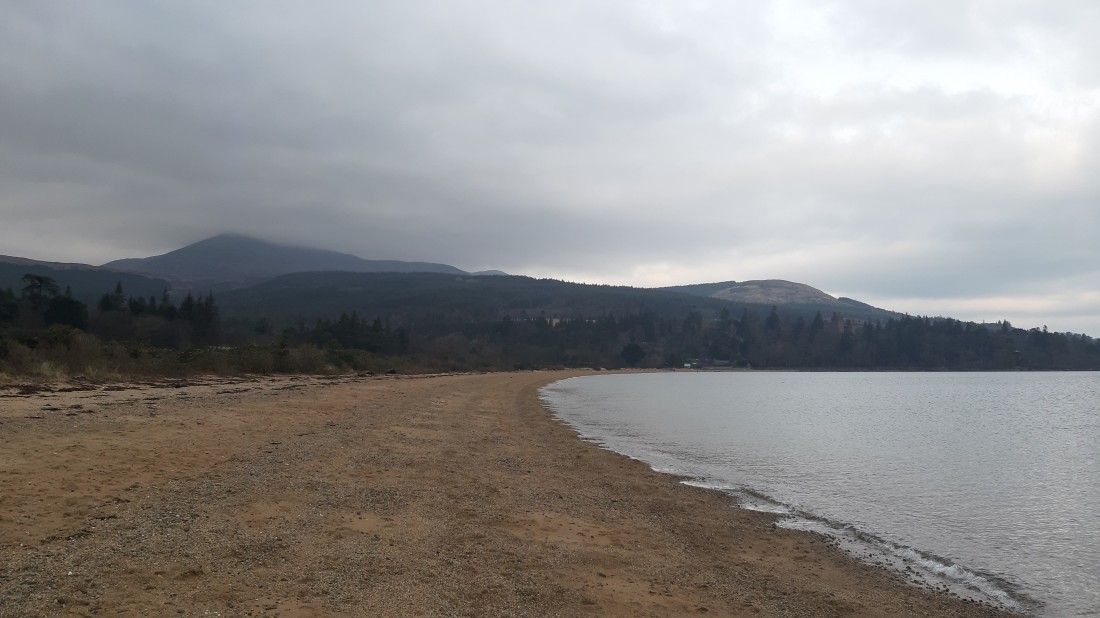 A walk for a day where the weathers not so good, this walk trails along the beach and saltmarshes from Brodick to Brodick Castle and country Park. From there you can visit the castle (in the Spring and Summer months) or tag on one of the many interconnecting woodland trails surrounding the castle. Previously the seat of the Dukes of Hamilton, first built in 1510 and occupied until 1958, Brodick Castle is now a national Trust for Scotland property. In one of the woodland paths we stumble across a ‘Fairies and Legends trail’, before heading back along the back road into Brodick. We have a fabulous view of the atmospheric Glen Rosa before nipping into the Brodick bar for something to warm our cockles. 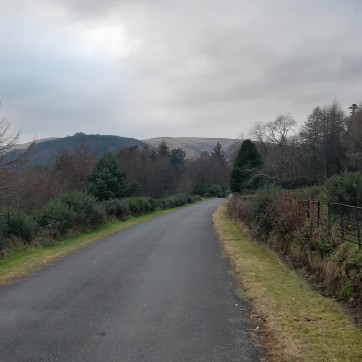 Brodick Castle, the ‘Fairies and Legends trail’ and the way home

We head to Dougrie on the West coast of the Island and just past Dougrie lodge we leave our cars in a layby. This is a 3-hour circular walk to Glen Iorsa. The first part is boggy but it’s not long before we reach the Dougrie estate path into the glen which follows the river Iorsa and leads us to the old boathouse at the foot of Loch Iorsa. A shower passes by, but the old boathouse wall offers some welcome protection. On the way back, with the wind behind us, the scenery is spectacular. The landscape is stark, but the open skies with fast moving billowing clouds frame the ochres and greens of the hills as the river snakes its way through the glen. After our walk we drive round the cost to the Kildonan Hotel for a warm drink, where the view across to Pladda on a winter’s afternoon, affords one of the best sunsets on Arran.

Sunset over Pladda, view from the Kildonan Hotel

On a wet day (luckily, we only had one during our week) there is still much to do in Arran.  The Auchrannie Hotel and Spa Resort in Brodick offers two swimming pools, a spa area and beauty therapies to indulge in on a cold blustery day, not to mention several welcoming bars and restaurants. There also is a thriving Art scene in Arran, with many local artists to visit; potters, painters, photographers and woodworkers and lots of craft shops and galleries across the island where their wares can be admired or purchased. If it’s a bit of shopping you are after, don’t forget a trip to Arran Aromatics, the Cheese shop, the Chocolate shop, or Wooleys Bakery, where you can try one of their famous oatcakes.

As the new decade arrives, I reflect on the last 10 years and think how much has happened, how lucky I am to have good health, and to have had the opportunity for many adventures. On the first morning of 2020 I join some of my group and around 40 other island revellers to partake in the Douglas Dook, where I take to the icy waters of Brodick Bay to celebrate the dawn of a new decade and remind myself that every now and then it’s good to step out of my comfort zone and to do  something different and just a little bit silly. And so, with numb feet, rosy cheeks and a grin on my face I raise a glass to the next decade and for very many more adventures to come! 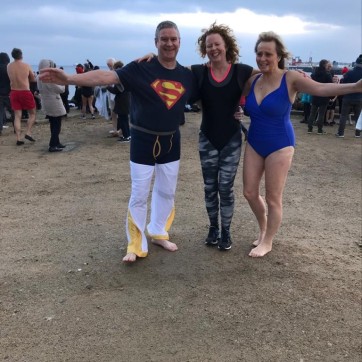