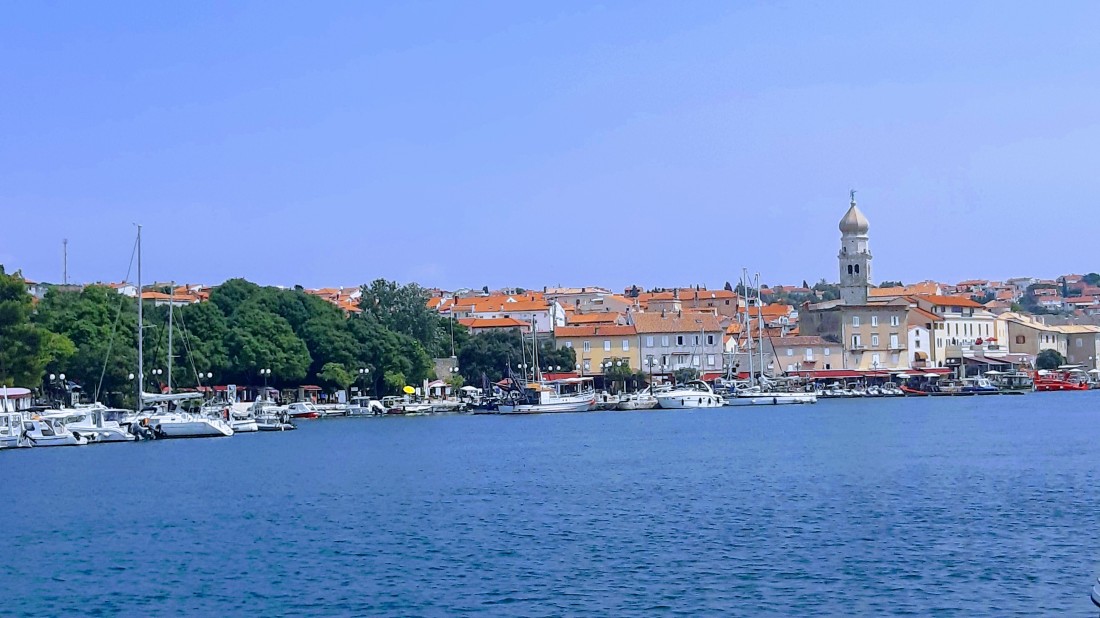 The town of Krk

We plan to spend 1 week on the island of Krk, the largest of Croatia’s stunning thousand islands, but end up staying for 2 (more about that later). Krk (pronounced Kirka) isn’t easy to say. 400 years ago, the Turks swept through the area, looting, pillaging, and stealing all the vowels! The lonely vowels that survived this time of alphabetic terror hid in groups of consonants leaving the island of Krk behind. The scenery is sublime. As we cross the 1430 m long arch bridge connecting the island to the mainland, we are treated to sweeping views of the Adriatic before travelling towards its verdant centre. A popular tourist destination, it is also rich in natural and cultural-historical heritage. Our first campsite in the north of the island, is near Osmjali and then we move to a campsite near Krk town. 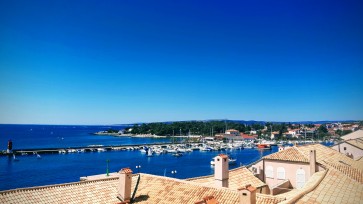 Beaches and towns of the island of Krk

We celebrate the ‘half New Year’ with fireworks, 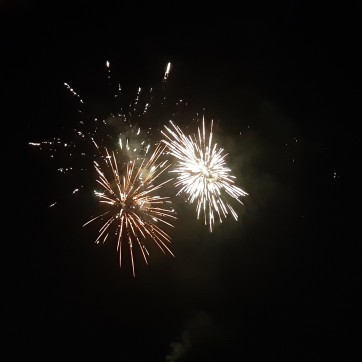 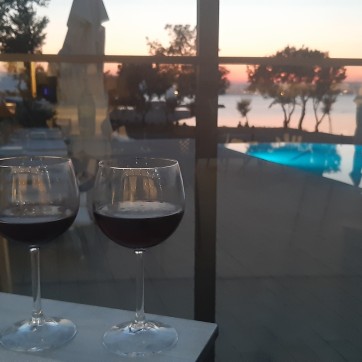 music and chocolate cake at the campsite. It’s six months since we spent the full New Year at Mandrem, Goa and in another 6 months, we will be celebrating 2020’s New Year with good friends and family on another island, the island of Arran. More celebrations follow and we visit ‘Rab’ intent on having some fun. That’s not big Rab fae Possilpark, wee Jimmy’s best pal……it’s the island of Rab, which sits between the islands of Krk and Pag. We’re on a boat trip and it’s a special day. It’s Johns birthday (we won’t mention an exact figure, but let’s just say he’s now nearer his eighth than seventh decade), and today is also the day I graduate (in absentia) from Glasgow Caledonian University after 10 years of ploughing through a PhD by Publication.

I don’t have my gown, but I do have a hat and I’ve had my photo taken for the occasion, so I’m halfway there. 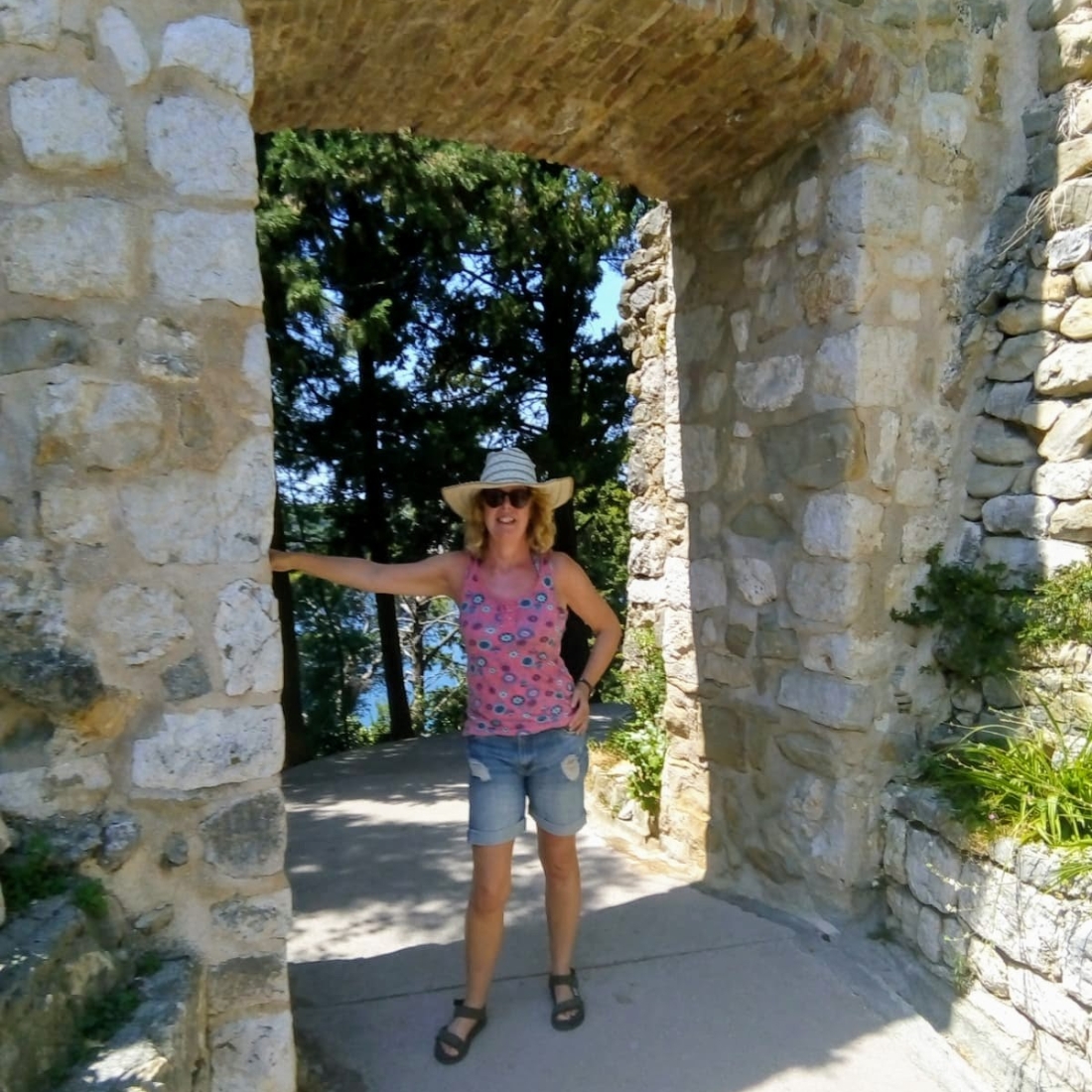 We have a lovely day, the only complaint being that it’s white wine for lunch (John much prefers red), but we cope admirably!

We visit the town of Rab,

The town of Rab

which sits on a narrow sliver of land protruding towards the mainland, bounded by ancient city walls and 4 church towers. After a quick tour we have time for some more swimming and snorkelling. We stop off on the island of Pag and I visit the olive groves of Lun, where more than 1,500 wild, old (the oldest being 2,000 year) olive trees grow. The sail back along the southern coastline of krk, past the golden beach, is heavenly. What a lovely day we’ve had…. the only thing missing of course is our family, who aren’t here with us to celebrate. The next day there’s more celebration as my son who has been studying Mental Health Nursing and is nearing the end of his 3-year training, phones to tell us that he is successful in his first interview, a community post, just what he was hoping for. This time John has plenty of cheap red wine in the van to mark the occasion!

Two days later we hire a scooter to explore some of the island’s other towns. First, we visit Baska, at the southern tip. It’s windswept and interesting with stunning views of the islands of Prvic, Goli and Sveti Grgur. Then we head east to visit Vrbnik (not many vowels there either!). Perched on a limestone outcrop, the town is centred round a 13th century church. Our final stop for the day is at the sands of Soline, on the North East coast, which is famed for its healing mud. Mineral laden black mud, good for skin and rheumatic problems, line its shallow waters.

We plaster ourselves, letting the black mud dry in the sun before washing off in the warm sea. 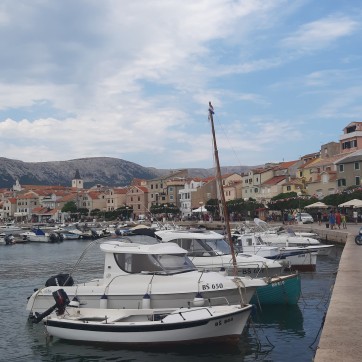 Baska, the streets of  Vrbnik and the healing mud of Soline

We hop on the scooter again and head home but as we travel uphill out of the bay, on a hair pin bend, we skid on some gravel and in an instant everything changes……. adventure becomes misadventure! John lands heavily on his shoulder and we both have cuts and bruises a plenty. We know we’ve been lucky and before the adrenalin stops flowing, we get back on the bike and make our way slowly back to the campsite, about 10 miles away. At the campsite we apply some frozen veg to our wounds and rest for a bit. It’s only later when I help John to get his t shirt, that I notice a big bump on his clavicle. “It’s clicking when I move it” he says and then I feel dreadful. I think he may have fractured his clavicle! A trip to the A &E department confirms the fracture and by the time we get back to our van its past 1am. So much for the healing mud…. I guess its healing powers don’t stretch to prevention!

When mishaps happen, there are many ways for our thinking to go. One is to say ‘if only’…. ‘If only’ we hadn’t hired the scooter…. ‘if only’ we hadn’t stopped at Soline….’if only’ we hadn’t decided to drive across Europe in a van. But if only isn’t very helpful. Far more helpful is to ask ourselves what the lessons learned are and what positives can be taken forward. John had been thinking of buying a scooter on our return to Scotland, but perhaps this has been a warning. Its only now that stories of his many accidents when he had a scooter in his teens/early twenties emerge, one of which was taking his bike test. So maybe this accident has saved his life and it has certainly saved him a lot of money.

John’s to have another x-ray in 7 days, so we decide to stay on an extra week at the campsite in Krk. The next 7 days pass in some degree of discomfort and frustration. There’s no swimming, no cycling, and no scooters, but we’re healing. After the hospital visit, I pack up (John’s on strict princess duties) and I now must take over doing all the driving of this giant motor-home for the next few weeks at least. It’s not the driving so much as the manoeuvring into tight pitch spaces that are challenging. John suggests its empowering, another positive to emerge from our situation, but I’m thinking that it’s terrifying! It’s time to leave and it’s raining. Just as I’m trying to figure out the logistics of my 10 point turn out of the pitch, our lovely Belgium neighbour, who just happens to be a lorry driver, offers to reverse it all the way up to the main campsite road. A big sigh of relief from me. The first part of the journey has gone well. This is definite case for a celebration……get the kettle on!

5 thoughts on “Celebrations, healing mud and misadventures on the island of Krk”