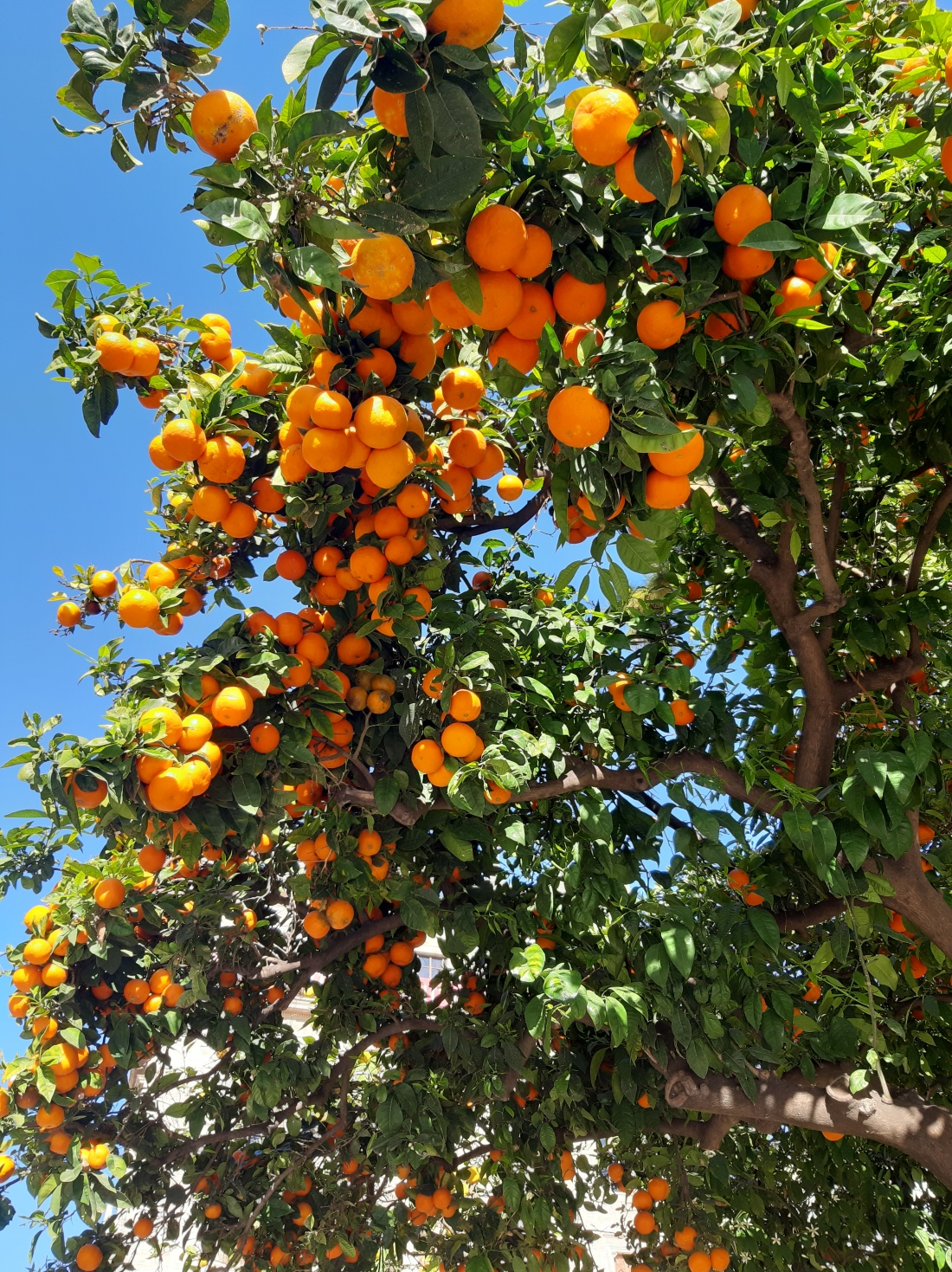 We have travelled to the Valencia region of Spain…. pronounced ‘Balenthia’, which will be our home until mid-April. The sun has come out and it’s about 22 degrees; very pleasant for March. I here storm Gareth has been causing havoc in the UK and I’m feeling rather guilty that we are bathed in spring sunshine ( but not a lot!). First, we stay in a campsite North East of Valencia for a few days and enjoy a wonderful cycle along the Via Ojos Negros Greenway, a 160 km walking/cycle track which runs from Ojos Negros in Aaragon (wasn’t he a hero from The Lord of the Rings?) to Valencia. We travel south of the city of Valencia to our next campsite which is near the coastal town of Oliva and the next day we cycle along an old railway route to Gandia. As we cycle past the orange groves, there is blue sky for miles and the trees are bursting with fruit. The smell of orange blossom wafts across the path and stirs the senses. I hope to rekindle this memory on those dark January days in Scotland.

We have an opportunity to visit the city of Valencia and join a bus trip organised from the campsite. We have struck it lucky, Las Fallas de San José (torches) festival, a traditional celebration, held in commemoration of Saint Joseph (the patron saint of a happy death) is on while we are here. We take a ‘free’ walking tour (https://mentavalencia.com/) which are a great way to find your way about a city and learn about local history and culture. Usually the guides are well informed, enthusiastic young locals and the idea is that there is no set fee, but that you tip the guide with what you feel reflects the value tour of your tour. Our guide, Natalie, has impeccable English and is beaming with pride for her home city. She tells us that the Fallas festival was originally celebrated to mark the arrival of Spring. Old wood left over from the Winter months was brought into the city and burnt on pyres, clearing the way for the new season. In modern times the wooden bonfires have been replaced by Fallas or ‘ninots’ (puppets) which are set alight on the final night (known as La Cremà -the Burning) of the two-week-long festival. Behind the scenes crews of artists, sculptors and craftsmen have spent months producing up to 350 elaborate constructions of paper, wax and wood brightly coloured displays of caricature figures towering in the many plazas of the city. Each is produced by one neighbourhood who raise large sums of money to attract the best artists to create the best Fallas and every year one Fallas is saved by popular vote and earns a place in the Arts and Science museum. In the Plaça de l’Ajuntament, a huge statue the Virgin Mary as Our Lady of the Forsaken is covered in flowers and is the last to be set alight. During the festival each neighbourhood also has a ‘reinas falleras’ (queen of the festival), who parades around the city in her casal faller (traditional Valencian) costume. Local traditional bands accompany the queens as they make their way through the city. We are visiting early in the festival but catch a glimpse of some of the Fallas still under construction and pass a table full of reinas falleras who are sharing a drink and having a natter. 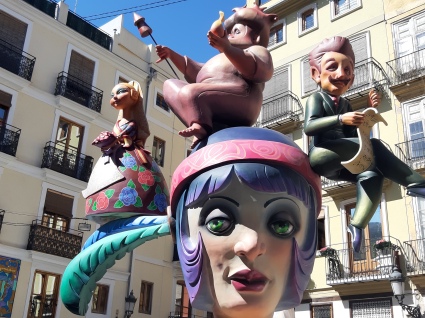 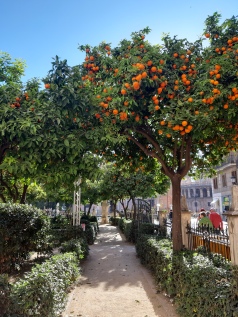 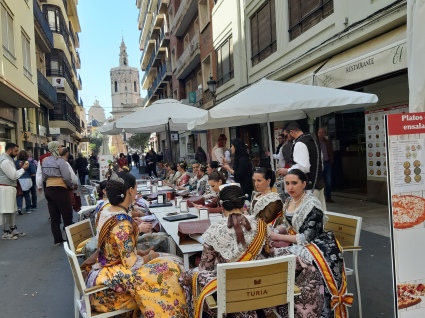 As Natalie, guides us through the streets of Valencia, we pass many stunning buildings. Valencia is very old, originally a Roman colony which was first established in 138 BC and some of the original roman roads are still visible. It is the third largest city in Spain, after Madrid and Barcelona and is a leading economic centre. Natalie proudly tells us that it has the best climate of Spain…. 300 days of sunshine, with a minimum daytime temperature of 16 degrees. It could be a twin of my home town Troon in South west Scotland which has 300 days of rain and maximum daytime temperature of 16! She tells us that Valencia has the narrowest house, the biggest market for fresh produce (central market) and the largest urban park (which is the old river bed of the river Turia) in Europe. It has its own language, is the home to the Holy Grail, the crucifixion cross of Jesus (not sure about that one though!) and is where Spain’s national dish, Paella was created.

On our day trip to the city, these were just some of the highlights:

Originally built in the 14th century Torres de Serranos is one of 2 remaining towers which were part of the old city wall, which has sadly now been demolished. It was used as a prison for noblemen for nearly 300 years and provides a good view of the old city from the top.

The cathedral, which houses the Holy Chalice (Grail) is a must-see destination in the city and sits in the Plaza de la Virgin, one of the oldest plazas in Valencia. The plaza is surrounded by the cathedral, the Tribunal del las Aquas, or water court, the Turia Fountain and Palau de la Generalitat (Valencia’s seat of the government). It has plenty of bars and cafes, providing a little oasis of open space and is a meeting point for many guided tours. The magnificent bell tower of the cathedral is well worth a visit. The spiral staircase (there are no lifts) leads up to a lovely terrace from which you can see the city all the way to the coast.

The Silk Market, ‘La Lonja de la Seda’ was built in the 15th Century, when Valencia was at its peak of silk trading and is one of the best examples of gothic architecture in the city. The Contracts Hall where the silk merchants brought their samples to trade is striking, with its spiral columns reaching up to a domed roof. In its day, the roof was painted blue and was spangled with stars. The sandstone columns were painted brown to represent the trunks and branches of trees reaching up to the sky. You can imagine what a buzz there would have been here. It’s well worth a visit and entry was free as part of the menta walking tour.

Also known as the Sistine Chapel of Valencia, this inconspicuous church is tucked behind the city’s narrow streets. Behind its doors there is an extraordinary fresco, depicting the life of St Nicolas (from whom the figure of Santa Clause is thought to have been based). The ceilings have recently been restored and this is a little jewel which is well worth a visit for the wow factor.

The City of Arts and Sciences

At the end of the Turia River Gardens sits the City of Arts and Science park, a sci fi complex which hosts an array of attractions. There’s an opera house (the tallest in the world), a science museum, an oceanographic aquarium (the largest in Europe), IMAX cinema, laserium, an outdoor garden and sculpture park known as the Umbracle and a concert hall. It is worth a visit, even if you don’t visit any of the attractions. The architecture is very other worldly and wouldn’t look out of place in the set for a sci fi movie. 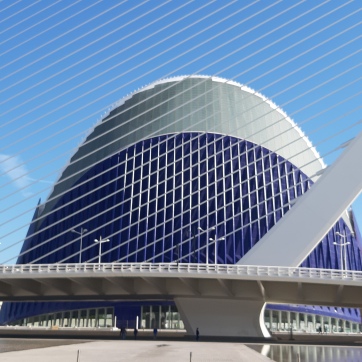 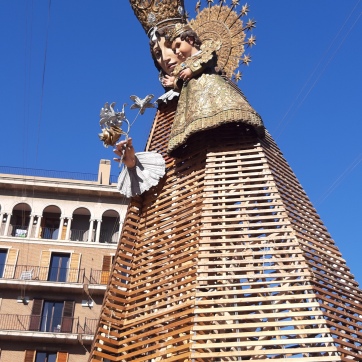 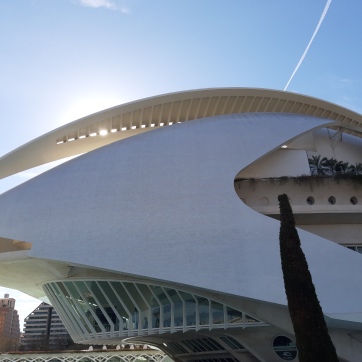 And at the end of our day we had a lovely Valencian paella (made with chicken (or/and rabbit), lima and green beans and plenty of saffron and a glass of Sangria. Delicious and a great way to finish off a fabulous day in the wonderful city of Valencia.

2 thoughts on “Oranges, Las Fallas and Paella in Valencia”