After a leisurely breakfast overlooking the Mekong river, we have a short bus trip to cross the border from Thailand into Laos, which is on the other side. We board a river boat which will cruise the 313 km down the Mekong to Luang Prabang, the former royal capital of Laos. I’ve not been feeling well, and I think the next 2 days will be just the best way to speed up my recovery. Day one and we meet our guide from Laos, Sak who gives us a brief history and an insight into the diverse cultures of this beautiful country. Laos first became a country in the 14th century and was then split into 3 kingdoms under Siamese rule. It was a French protectorate in 1893, eventually becoming independent in 1953. In 1975 Laos became Laos, PDR (people’s democratic republic) and has since remained a communist state with a thriving tourist industry and liberal market economy.

Day one and we drift along the river, reading, chatting, drinking tea and coffee, eating baby bananas and lying across the cushions at the front of the boat. The river is surprisingly fast flowing and is full of eddy currents. The milky brown water swirls in both clockwise and anticlockwise directions and our captain is skilful in negotiating the river’s deep hypnotic waters. Every now and then a wooden speed boat zips past taking its passengers from village to village, the easiest way to travel in this remote part of Laos. The banks of the river are steep and piled high with golden sand. The villagers grow vegetables along the fertile banks, children play in the water and basic wooden fishing rods are fixed on rocks along the riverbank waiting to catch a Mekong cat fish. Further back, the forest is lush green with banana, coconut and teak trees rising into the conical hills beyond. We help to make banana fritters for lunch and Natthachai cooks some river weed, seasoned with sesame, garlic and tomato, as a snack, and it tastes a bit like chewy seaweed. The captain’s wife cooks a lovely lunch of yellow chicken curry, stir fried vegetables, spicy pork meatballs and boiled rice. We arrive late afternoon in the remote Laos village of Pak Beng and Sak takes us to visit the local market. As we walk along the village street the smells of BBQ’d sausages, chicken, whole fish and pigs’ intestine (a local delicacy!) drift into the evening sky. At the market, next to the brightly coloured fresh vegetables, there are more surprises… dried rat and squirrel, live frogs (to be boiled later for dinner), fried crickets and water buffalo skin (which includes the hair) and legs. I’m so glad that our lunch was prepared without any of these ingredients which are making my stomach churn. But as I think more about what I am seeing, I wonder about the differences between local Laos cuisine and what we would buy in our own  supermarkets. Everything here is fresh, its locally sourced and not commercially farmed, and provides a rich and diverse diet. In contrast the food we buy has often travelled many thousands of miles to be on our shelves, is produced using pesticides and animals are farmed in cramped conditions. So, although I’m feeling just a little squeamish about the possibility of this fair being presented for tomorrows lunch, it has certainly given me food for thought! 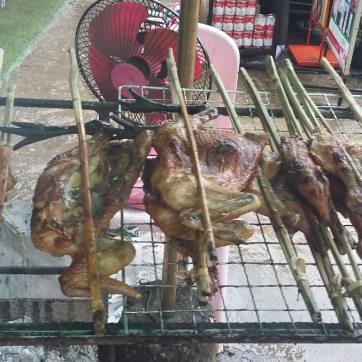 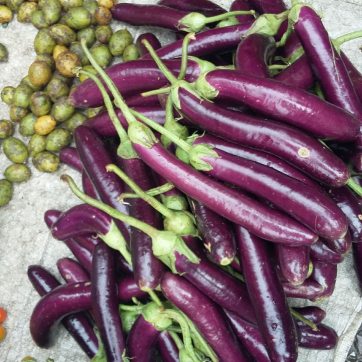 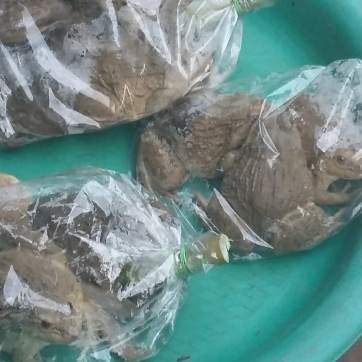 The next morning breakfast is not included as our chef at our local guest house has gone to school. I grab a cup of Lipton’s tea (the standard fair in Laos) and banana muffin at a small restaurant on our way to the boat and I wonder about how the local cuisine here will be influenced in the future by the tourists and backpackers who continue to visit this area. It’s been raining overnight, and the day is overcast… the tail end of storm Pabuk which hit southern Thailand some 4 days ago has caught up with us. We board the boat and wrap blankets around our shoulders to keep warm in the morning gloom. After another lovely lunch (not a dried rat in sight!) we stop at Pak Ou Caves, 2 sacred ancient caverns, first used as a temple by the Laos royal family. The caves are full of thousands of gold Buddha statues, brought by devoted villagers and travellers over the centuries. At the entrance, some Laos ladies are selling birds in small bamboo cages. Legend has it that a young man fell ill and desperate for a cure, his wife visited a local Buddhist temple where a monk instructed her to release birds, to prolong his life. The man recovered and led a long healthy life and this practice has continued throughout South East Asia, particularly in areas near a temple and at the New Year.  The idea is that if we buy and then release the birds that this will bring us a long and lucky life.

When we arrive later in Luang Brubang and visit the ATM to get some local currency. The exchange rate is extreme; 10,000 Lao kip equals £1, so for the first time in our lives we are millionaires… we are so lucky and I can assure you that no birds were released during this transaction!

2 thoughts on “Lunch on the Mekong: turn away now all vegetarians!”